Governor Phil Scott and Vermont Congressman Peter Welch joined members of the OnLogic team on May 31 to celebrate the company’s groundbreaking ceremony. Also present were officials from the city of South Burlington, representatives of ReArch Company, the general contractor based in South Burlington, Colchester’s Wiemann Lamphere Architects and VHB, an engineering firm in New York.

The new facility is being built to enable OnLogic to meet the ever-growing demand for the company’s small, highly customizable computers designed for use in industrial environments.

Located next to the well-known Reverence sculpture, often referred to as the whale tails, in South Burlington’s technology park, OnLogic’s global headquarters will house all business functions of the 19-year-old technology company.

OnLogic’s Vermont-based team is currently spread across its existing South Burlington headquarters on Thompson Street and temporary office space along Kimball Avenue that the company has leased during the pandemic to provide employees with additional space for safer in-person work.

“This is obviously a wonderful milestone for OnLogic,” said Lisa Groeneveld, co-founder and executive vice president of OnLogic, at the groundbreaking ceremony.

“This new facility will provide our team with the space and tools they need to continue their incredible work of designing, building, marketing, selling and supporting next-generation computing technology. But I think it’s also a testament to South Burlington’s business and technology communities, which continue to demonstrate the incredible spirit of innovation that has grown and is nurtured here.”

The state-of-the-art manufacturing facility will provide space for OnLogic’s 150+ Vermont employees to collaborate effectively and innovate. The company estimates that the new facility will be able to fully accommodate the planned growth in the state for the next seven to 10 years. According to an OnLogic press release, the company has grown at an average of 30 percent annually, with global sales of $110 million in 2021.

With construction now underway, OnLogic plans to open the facility towards the end of 2023.

The development of the new space focused on sustainability, energy efficiency and community connectivity, according to OnLogic.

The project should include:

“This expansion is a clear sign of what a global leader this company is, and I look forward to seeing how much more.” [it] can do once this facility is up and running,” said Scott. “The fact is, there are so many benefits to growing a company like OnLogic. Innovative companies and the growing tech sector, [are] to make us known around the world, and OnLogic is a big part of that.”

The technology company also has US offices in Cary, NC and overseas offices in the Netherlands, Taiwan and Malaysia.

According to the press release, OnLogic systems are engineered to withstand conditions that could damage or destroy consumer-grade computing equipment. His clients come in all sizes, including some of the largest and most well-known companies in the world. OnLogic hardware users are innovating in manufacturing technology, smart agriculture, smart cities, energy management, and the Industrial Internet of Things. 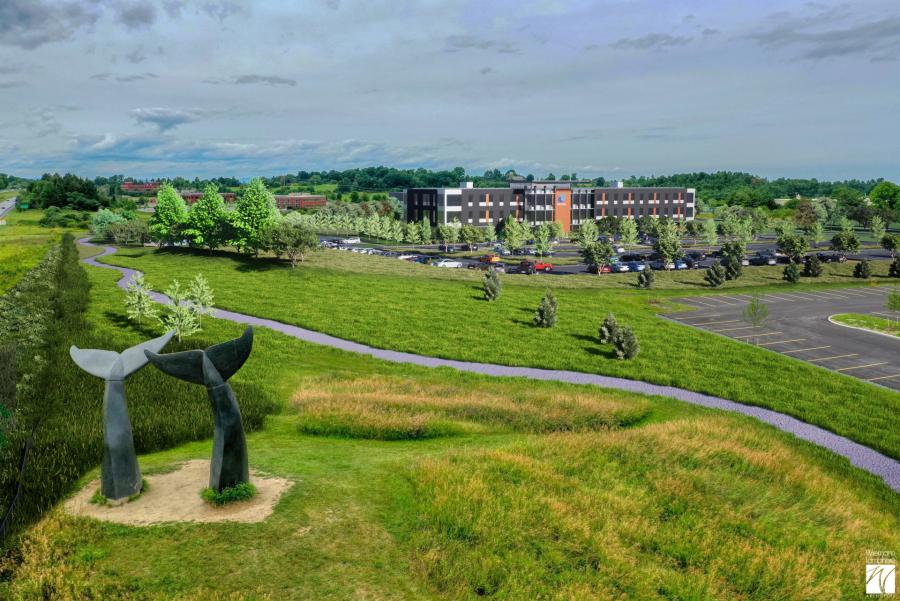 Located next to the well-known Reverence sculpture, often referred to as the whale tails, in South Burlington’s technology park, OnLogic’s global headquarters will house all business functions of the 19-year-old technology company. (Rendering Wiemann Lamphere Architects)