Damen Naval is the prime contractor for the construction of the four new F126 frigates for the German Navy. The ships will be built entirely in Germany and the first is scheduled for delivery in 2028. (Photo: Ladies Naval)

According to Hein van Ameijden, managing director of Damen Naval, the choice was based on Rolls-Royce’s high-end marine-oriented mtu solutions and experience in the high-end marine market. “We are pleased to announce the news of this contract and that we have found another German partner for this prestigious and important project for the Bundeswehr,” said van Ameijden. “We look forward to continuing to work with Rolls-Royce and its mtu solutions.” 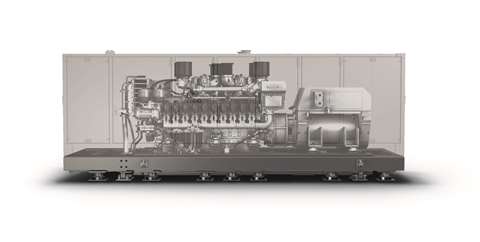 Rolls-Royce will supply mtu 4000 series generator sets similar to the one pictured for the F126 frigates, bedded on special supports and encased in a soundproof enclosure. (Photo: Rolls Royce)

The on-board energy of every F126 frigate is provided by four mtu Series 4000 variable-speed generators. The agreement also includes an Integrated Logistics Support (ILS) package. It is the second F126 order to be awarded to Rolls-Royce since Damen Naval selected the company to supply the mtu NautIQ Master and mtu NautIQ Foresight automation solutions earlier this year.

“The biggest benefit of the variable speed generator set is the reduction in fuel consumption at part load,” said van Ameijden. “For Damen Naval, it is the first time that variable speed generator sets have been used in combination with a DC grid on naval vessels. We anticipate that this type of configuration will be the new standard in high-end marine applications.”

With this contract, Rolls-Royce is continuing its decades-long cooperation with the German Navy. Ships like the predecessor frigate classes F124 and F125 as well as the corvettes K130 are equipped with mtu engines and diesel aggregates from Rolls-Royce. The diesel units will power the F126’s combined diesel-electric and diesel-assisted (CODLAD) propulsion system. The CODLAD propulsion system offers a maximum speed of more than 26 knots. The first diesel units will be delivered to the shipyard in early 2024.

In June 2020, the Federal Office of Bundeswehr Equipment, Information Technology and In-Service Support (BAAINBw) awarded the construction contract for the four F126 frigates to the Dutch shipbuilder Daman as general contractor with its subcontractors Blohm+Voss and Thales. The ships are built entirely in Germany at shipyards in Wolgast, Kiel and Hamburg. The first ship will be handed over in Hamburg in 2028. The contract includes an option for two additional frigates.