Colorado is one of the most beautiful states in the country. Our mountains stand proudly over us like great protectors, awe-inspiring in their majesty. There are green fields that stretch on forever. Waterfalls hide in evergreen forests and the birds seem to sing just a little sweeter. But beneath the beauty lies a darkness. Colorado is home to some of the strangest and most terrifying events in our nation’s history. Murders, hauntings, massacres, acts of sheer depravity, all happened under the mountain’s gaze. These are three of the most terrifying events in Colorado history to remind you why you should be afraid of the dark.

Cheesman Park is very popular with the people of Denver. When the sun shines, people flock there, bringing their dogs, frisbees, beer coolers and the ingredients for perfect summer days. But when the sun goes down, Cheesman is one of the highest reported haunted places in the state. We’re not here to discuss the existence of ghosts, but darkness reigns beneath this soft grass.

Cheesman wasn’t always a park. It was originally Prospect Hill Cemetery, the final resting place for criminals, vagrants and the poor. It functioned as such until 1890, when a Senator named Henry Teller convinced Congress to let him convert the land into a public park. Family members of the deceased were notified of the upcoming change and given a few months to collect the bodies of their loved ones. However, since the people buried there belonged to the lowest class at the time, only a handful of families could actually afford to claim their dead. It is estimated that around 5,000 bodies were unclaimed.

This posed a problem for the city. To rectify this, they hired an undertaker named EP McGovern. His and his crew’s job was to dig up the bodies, put them in coffins, and take them to another cemetery on the other side of town. This is where the story gets really macabre. A low moral man, McGovern was paid by the coffin and saw a way to make more money. He could ship more coffins if the coffins were smaller. He and his crew began dismembering the bodies and placing the smaller parts in coffins meant for children, taking for themselves the valuables they found on the deceased. However, it wasn’t long before the city realized that an excessive number of children’s coffins were being shipped from the former cemetery, and McGovern’s scam was quickly shut down.

This again left the city with a problem. What to do with the remaining corpses? They decided to leave them where they are and start building the park. Cheesman Park was officially opened in 1907 and an estimated 2000 bodies are still buried under it. Even today there are reports of workers coming across ancient bones. It is known that when it rains, bodies come to the surface. So next time you feel like going for your late night jog through the park and you hear footsteps running behind you, it could be one of those poor souls who was never allowed to rest. 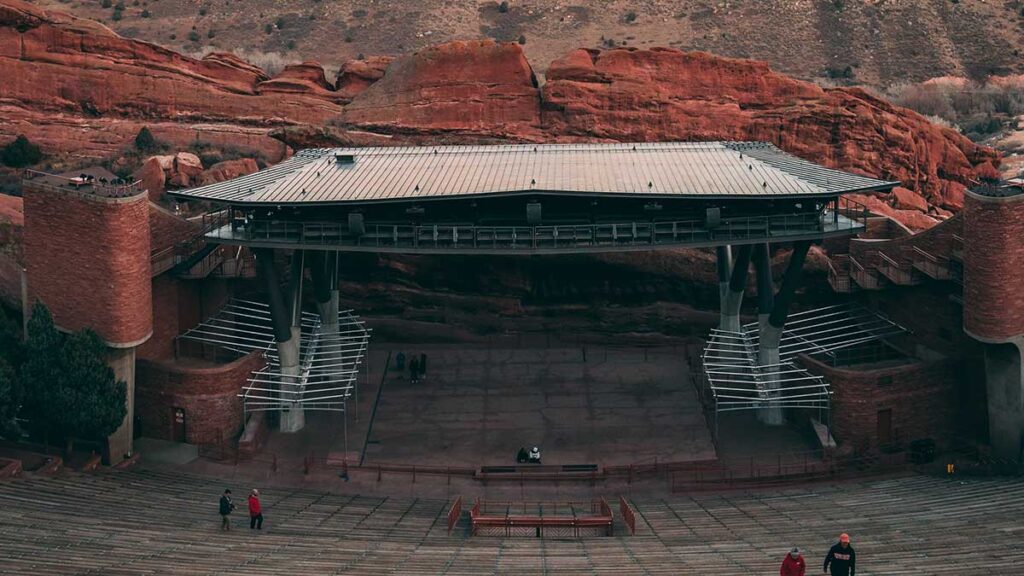 Red Rocks is a unique place, sacred ground, whose sidewalk is filled with stories of thousands who walk it weekly. It’s home to many ghost stories, but one in particular stands out: The Headless Hatchet Lady.

The urban legend is very popular in this part of the state. Rumor has it that the Hatchet Lady targets young lovers and those who misbehave. They say she appears to the young, to the lecherous, to those trying to fill their cars with smoke and sweat. Emerging from the mist, hatchet in hand, she makes sure these youngsters don’t reach adulthood.

The first is that of a woman named Old Mrs. Johnson. She was a virtuous and proud woman who loved her state, her home, the natural beauty that surrounded her. In 1905 Mrs. Johnson came into conflict with a wealthy man named John Walker. Walker was a greedy man and he saw these beautiful red rocks and dreamed of building a stage between them. This enraged Mrs. Johnson and, to the point of her death, she attempted to sabotage the construction at every turn, going so far as to cover her head with a hood and brandish an ax at the builders. It is said that her anger ran so deep and so deep that she now haunts the rocks, seeking revenge for the destruction of her homeland.

There is another story. There was a poor couple who lived near the rocks in the early 20th century. Sickly and prone to seizures, he was unable to work. She was sticky, easily angered, and already beginning to slip mentally. After some time he died and she couldn’t afford to keep her house, so she found her way to a nearby cave and made it her home, using a hatchet to search for food. Over time, her mental health deteriorated and she became bolder. She was said to wander the outskirts of Morrison, waving her dried blood-encrusted ax at everything she encountered. She became an eerie presence in the area until apparently dying of illness or old age.

“She emerges from the mist, hatchet in hand, and makes sure these youngsters don’t reach adulthood.”

The Headless Hatchet Lady appears to be a hybrid of those stories, stories that I hope you’ll remember the next time you see a show at Red Rocks. Stay close, don’t wander away, and put your best foot forward. You never know when the Hatchet Lady will be around. 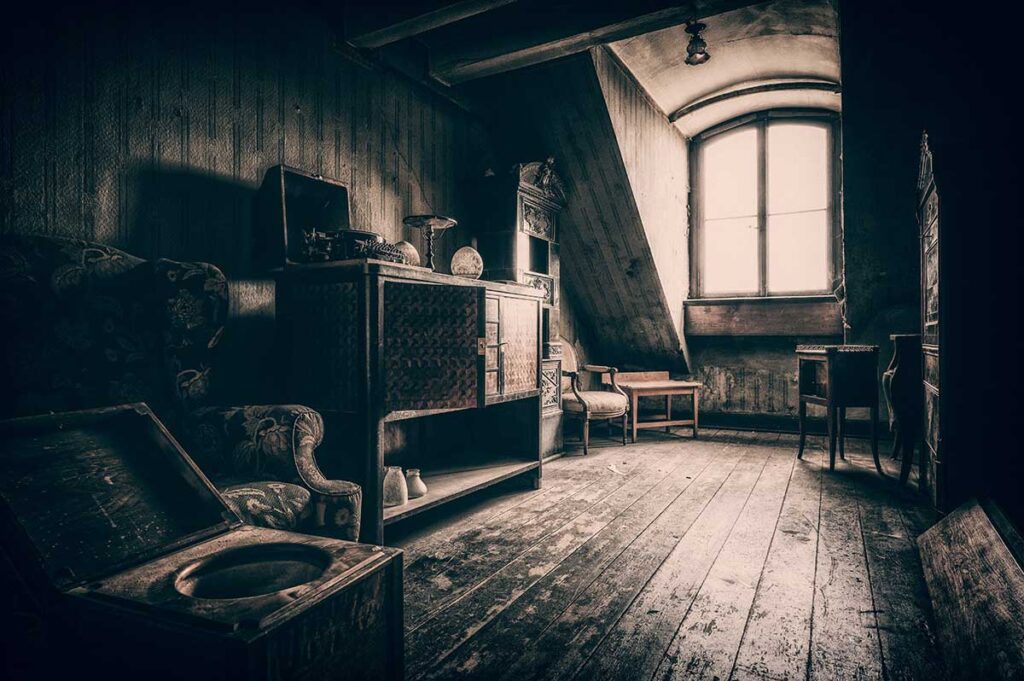 This is the story of a man named Phillip Peters and the man who murdered him in 1941. Phillip Peters was a retired railroad worker who had lived with his wife in their home for three decades. Together they were members of the Denver Guitar Club. In the weeks leading up to his murder, Peters had the house to himself. His wife Helen broke her hip and was recovering in hospital. During this time, Peters met a man named Andrew Coneys, a poor, unusually tall, and gaunt drifter who had suffered from childhood health problems and was a member of the Denver Guitar Club. One night the Coneys went to the Peters residence to demand some money and food. Philip Peters declined as he was old and home alone. A few nights later, Coney’s broke in to steal groceries. Peters, who heard the man digging around, went to meet him. In response, Coneys beat Peters to death with an iron stovetop shaker and appeared to disappear without a trace.

Police investigated but no leads were found and the case went cold. Helen Peters returned from the hospital a widow. In the months that followed, Helen and a friend who let her live with them as a kind of nurse began to notice strange things. Food would be missing. Unfamiliar noises would echo through the house. The two women were convinced of a spook. Helen then left the home she had known for thirty years, the home where she had raised a family, and moved in with her son in Grand Junction.

“Coneys beat Peters to death…and appeared to disappear without a trace.”

Reports of strange noises and a strong odor emanating from the vacant home continued. The police investigated several times but could not seem to find out where it all came from. As more and more reports came in, two detectives were dispatched to inspect the property. One night, officers noticed a man moving around the former residence. They burst in and saw a pair of legs hanging from the attic door and were quick enough to grab them and pull down whatever was there. It was Coney’s. He has lived in the attic of the former Peters house since the murder, about nine months. He had collected his rubbish in a corner and hadn’t bathed the whole time, the stench was so bad that one of the arresting officers vomited on the spot. Detective Fred Zarnow then told the press that “a man would have to be a spider to make it up there long,” leading the media to dub the Coneys “The Denver Spider Man.”

Coneys was sentenced to life imprisonment, where he died in 1967. He has influenced several parts of pop culture, including an episode of CSI: Crime Scene Investigation. It now serves as a reminder to check the dark and damp spots in your home. You never know what kind of spider might have found its way.