The city of Perth was named and founded by Captain James Stirling in 1829 as the capital of the Swan River Colony. However, the traditional stewards of the land are the Whadjuk Noongar, who have lived in the area for at least 45,000 years. As such, Perth is a city rich in history and culture which has resulted in some deeply fascinating architectural designs, influences and subversions.

Perth is particularly well known for the Gothic design influences evident in many of its community buildings and houses. Gothic architecture is still highly celebrated in Perth and throughout Western Australia, and maintains its status as one of Australia’s most popular design styles to this day. Brutalism is another facet of Perth’s architectural culture, contributing to the city’s composition with exposed concrete and brick facades a common sight on Perth’s residential streets.

Perth was also one of the first cities in Australia to adopt the block-heavy style of early Brutalism. Many large, bulky public buildings were born out of a desire to introduce Perth to the modern world. Their design and construction was aided by the mining boom of the 1960s, which flooded the city with the resources to construct large and efficient public buildings. Such buildings have become part of Perth’s iconography, including structures such as the Public Transport Center Building in East Perth.

Another factor that led to the rise of Brutalism in Perth architecture was the affordability of building materials. In the 1970s, concrete and clinker were extremely cheap – making them a favorite for burgeoning construction companies. Hale School Hall in Perth is considered one of Australia’s first Brutalist buildings. Brutalism’s popularity first rose in Perth before spreading to the eastern states.

Perth’s first architects, Tom McKendrick and Elliot Langdon, laid the foundations for a city of architectural diversity that would later stretch for miles. The Western Australian city has nurtured such historic architects as George Temple Poole, who made his name as a designer in the early 1900s, and Iwan Iwanoff in the 1950s to 1980s. Modern Perth celebrates as many bright stars in the architectural world as Kerry Hill and Jeffrey Howlett.

When it comes to architecture in Perth – both modern and historic – there is plenty to choose from. Perth is constantly experiencing new developments, revitalizations and expansions. Every week, new interior designers seem to be proposing a makeover of one of Perth’s historic or abandoned buildings. Nonetheless, there are some iconic buildings that stand the test of time when it comes to the most beautiful buildings in Perth. Here are some of the highlights.

Architecture Perth: The Captivating and Unique Designs of Perth Buildings

Located at 24 View Street North Perth, the building is just 3 km from Perth CBD. The North Perth Lesser Hall displays influences from Gothic and Baroque architecture, making it one of the most theatrical and opulent buildings in Perth’s cityscape. 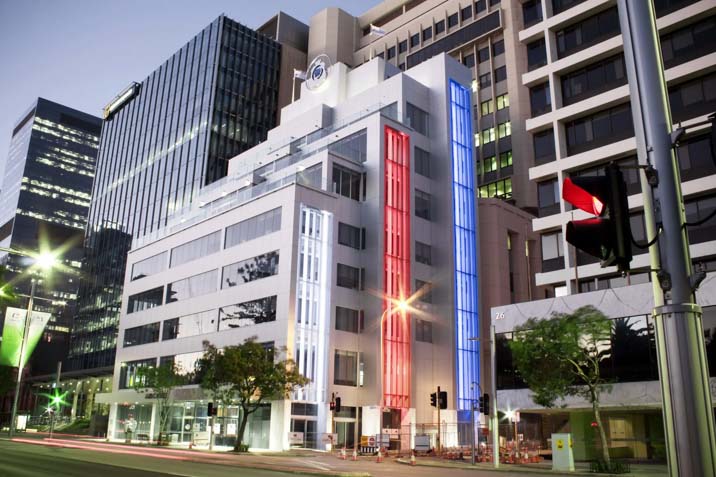 This building, located at 28 George St Terrace, is a space for ex-service, community and businesses associated with the Australian Defense Force to congregate and build camaraderie. The building was completed in 1934 and designed by Maccormac Architects, one of Perth’s leading architectural firms to date. 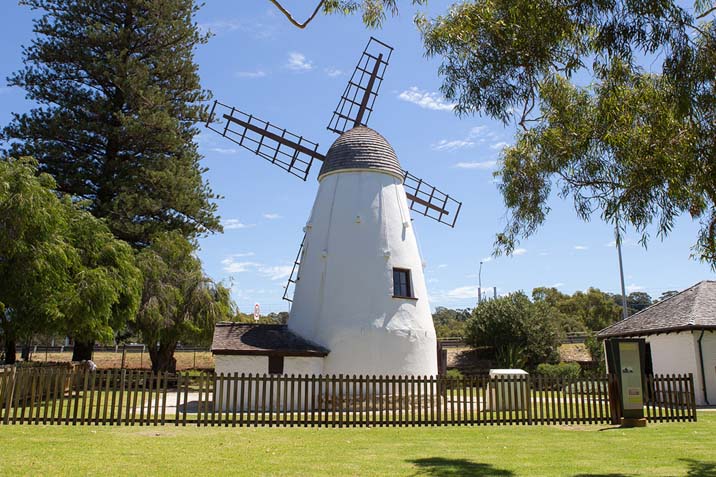 This historic building is one of Perth’s most famous cultural landmarks. Completed in 1835, it provided many jobs for the community into the early 1860s. The building was the town’s main source of flour, producing up to 680 kg of flour per day at peak times.

The Old Mill has been converted to a variety of things over the years – including a wine salon, poultry farm, hotel and private home – before being granted to the City of South Perth and transferred to the National Trust. For those curious about Perth architecture, you can take a virtual tour of The Old Mill here. 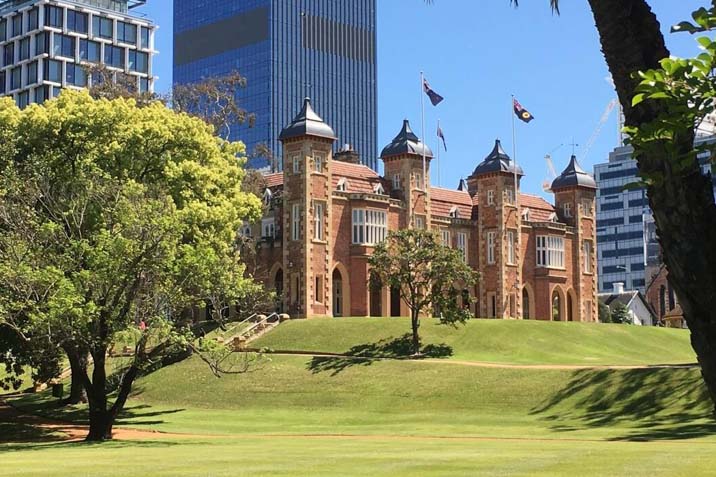 Government House is the official residence of the Governor of Western Australia. Remarkably, it’s located in Perth’s CBD, although the building itself hardly looks like it should be at home among skyscrapers. Constructed between 1850 and 1860, it is one of Perth’s most impressive official buildings. The two-story mansion was designed by Edmund Henderson, who was heavily influenced by the Jacobean Revival style. 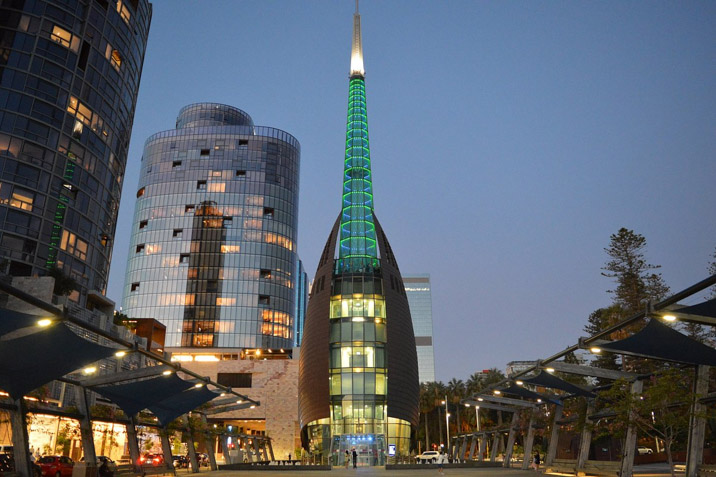 This magnificent bell tower houses the Swan Bells, an 18-bell symphony hanging from a 82.5m high belfry. Western Australia’s most culturally significant bell tower was specially designed to house the twelve bells of St Martin in the Fields – historically significant bells belonging to the congregation at Buckingham Palace that were built before the 14th centuryth Century. 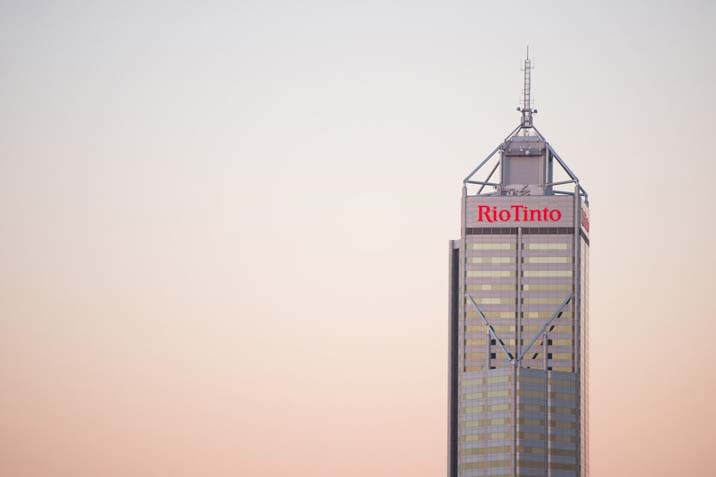 Well, Perth isn’t particularly known for its skyscrapers – but that doesn’t mean there aren’t any. The Central Park Tower (also known as the Rio Tinto Building) is one of the tallest buildings in Perth at 205m. The Rio Tinto building, pushed out of the running by Brookfield Place (234.4 m), held the title of Perth’s tallest building from its completion in 1992 until 2016. 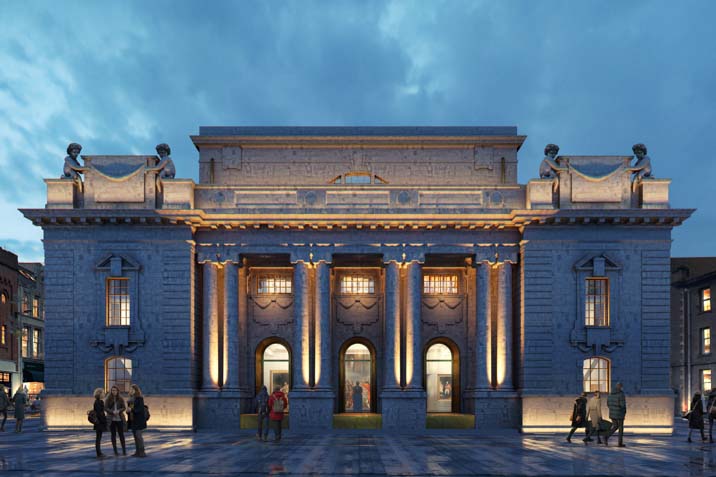 Perth City Hall is the best example of how Gothic architecture influenced Western Australian design. Perth City Hall stands amidst skyscrapers on the corner of Hay Street and Barrack Street.

Designed by Donald Bailey, it is Australia’s only Gothic-style town hall. There are many other things that make City Hall unique; For one thing, it’s the only town hall in Australia built by convicts. The City Hall was the tallest building in Perth at the time of its completion.